Every resident in Sabah would be encouraged to do their part by registering their interest to be vaccinated.

According to the Department of Statistics Malaysia (DOSM)’s Demographic Statistics First Quarter 2021, Sabah has the second largest state population (3.9 million) after Selangor (6.6 million).

As of July 10, only 34.1%, or 939,380 individuals out of 2.8 million qualified population (above 18 years old) in Sabah, have registered via the MySejahtera application for vaccination. It is relatively far behind the next lowest Malaysian state, Kelantan, at 55.78% as of July 11, according to the statistics released by the Covid-19 Vaccine Supply Access Guarantee Special Committee (JKJAV).

Such a figure is also far behind the neighbouring state, Sarawak, which has registered 83.71% as of July 11, according to JKJAV.

The number of vaccine registration also differs by districts. As of July 10, urban districts, for instance, Putatan, Penampang and Kota Kinabalu, have received 80.4%, 73.7% and 46.1% registration respectively.

On the other hand, rural districts like Nabawan, Kinabatangan and Tongod only have obtained 12.1%, 10.5% and 9.8% registration correspondingly.

Diagram 1 further reveals different vaccine registration levels across all districts in Sabah as of July 10.

Even though Sabah only records less than 300 Covid-19 cases on average daily, a low number of vaccine registration in Sabah might deter Sabahans the chance to enjoy normalcy sooner.

According to the Economic Action Council (EAC) secretariat, more than 600,000 households who were initially in the middle 40% (M40) income group have slipped into the bottom 40% (B40) category.

Although the data does not indicate the income reduction among Sabahans in particular, it is undeniable that many Sabahans are still struggling to recover from the effects of the strict restrictions imposed since mid-March last year.

This is especially apparent when Sabah recorded the highest infection rate from the Benteng Lahad Datu cluster, with confirmed cases reaching 300 a day after the nomination day for the Sabah state snap election on September 12 last year.

The closure of domestic and international borders also led to more temporary outlet closures, empty shop units and rental signs have displayed along the streets, particularly in the city centre of Kota Kinabalu.

Given Sabah, the poorest state in Malaysia has recorded a poverty rate of 19.5% based on the 2019 Poverty Line Income, this could result in more than 615,000 Sabahans slipping into absolute poverty especially with a majority of low-skilled workers who purely rely on daily wages to survive and have no savings.

Indeed, it is challenging for the JKJAV to mobilise many vaccine corps volunteers driving through muddy, uneven roads besides taking a boat ride to reach the remote populations who live beyond 5km of any health care facility within Sabah. However, with greater coordination between the federal government and the Sabah state government, more residents based in remote areas eventually would be aware of the importance of vaccination.

For ensuring effective outreach programmes for residents in rural and remote areas, government agencies could work with non-governmental bodies and vaccine corps by preparing short and simple messages on the steps and potential side effects of immunisation in the form of leaflets, in addition to information disseminated through newspapers and magazines. They could explain the importance of vaccination while distributing leaflets through house-to-house visits.

Besides medical, nursing and pharmacy students, vaccine corps could be formed by community grassroots, comprised of retired or unemployed clinicians. They could travel to remote villages and assist individuals who do not have internet access or digital gadgets to register for vaccination.

By mobilising vaccine corps on a large scale, the Sabah state government could expedite the vaccine registration process within the state, besides providing the chance for every Sabahan to receive vaccination sooner.

Despite the National Covid-19 Immunisation Programme (PICK) Handbook has outlined the usage of mobile vaccination clinics, most of the sites are within urban areas along with the west coast of Peninsular Malaysia.

To set up more mobile clinics, the current administration could consider renting empty community halls, universities, hotels and other appropriate facilities in different zones of each constituency. Not only respective owners could weather the health crisis, but it also provides convenience for residents to register vaccination.

As the current administration plans to station 15,000 officers in 950 vaccination centres throughout the country, some of them can be allocated to Sabah, giving extra helping hands in vaccine injection for the benefits of Sabahans.

The food vouchers or cash payment initiative is also applicable to illegal immigrants and foreign workers in Sabah. By including everyone in the vaccination programme, Sabah could gauge the right balance between lives and livelihoods, protecting citizens from any deadly epidemic.

Therefore, to overcome a low number of vaccine registration in Sabah, it is timely to have a real whole-of-society effort, going beyond the auspices of the Ministry of Science, Technology and Innovation (MOSTI), Ministry of Health Malaysia (MOH) and the National Security Council (NSC).

This would involve different stakeholders such as non-governmental bodies, corporations, schools, universities and private healthcare providers.

By marking and including all the semi-urban, rural and interior areas onto the map, Village Community Development Councils (MPKK), Community Development Officers (PPM), resident committees, councillors and community leaders could assist residents registering vaccination in their respective communities.

When the Sabah state government is committed to overcoming a low number of vaccine registration within the state, every resident in Sabah would be encouraged to do their part by registering their interest to be vaccinated. 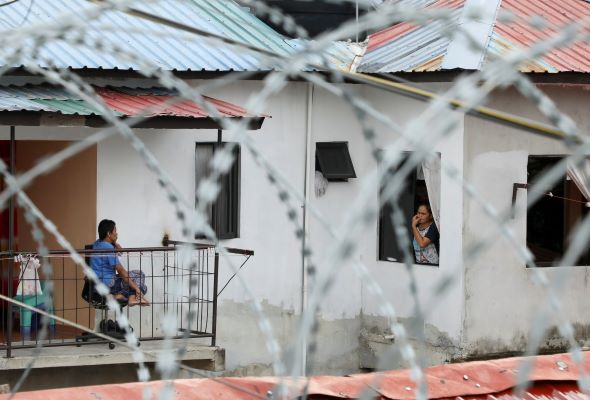 Are we easing movement restrictions a little too soon?
Next