Better still, stern action ('rotan') in the form of hefty fine on the political party organising the campaigning and ceramah that has failed to ensure the SOPs were... 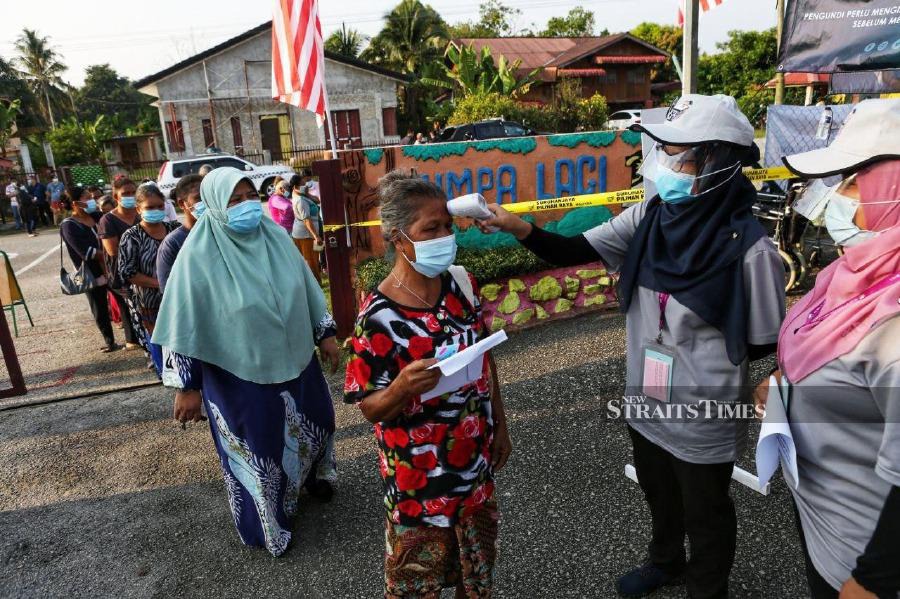 Better still, when the United Malays National Organisation (Umno) and Parti Cinta Sabah declared both parties will be sitting out from contesting in the by-election for public health safety reason — a magnanimous attitude rarely seen in politics.

Speaking to Sinar Harian, EC chairman Abdul Ghani Salleh says the Batu Sapi by-election can be delayed if the area is declared a Covid-19 red zone, otherwise the EC is required by law to hold a by-election for the parliamentary constituency within 60 days following the death of its incumbent, Liew Vui Keong.

“So, within 60 days, the EC needs to take action to fill that vacancy unless the government declares the Batu Sapi area as a red zone, where the outbreak is so bad it cannot be controlled and there is an emergency.

“Only then can we consider postponing the by-election,” he said in commenting on objections from certain parties against holding a by-election in Batu Sapi amid the spike in Covid-19 cases in Sabah.

What’s interesting here is when the constitutional experts talk about emergency, they could be referring to a national emergency of the coup d’etat type and must have missed the localised emergency of other types whose provisions must be in the Election Commission Act.

The call for postponing the by-election is getting traction after a surge in Covid-19 infections arising from the just concluded Sabah state election has driven the daily infection figure in Malaysia to its highest – 691 on October 6 — since the pandemic started early this year. It has dropped to 375 yesterday.

Despite admitting there are some weaknesses in organising the Sabah state election, Prime Minister Tan Sri Muhyiddin Yassin drew flak, most of which was politically motivated around the “Abah” strategy which was the key success ingredient in Gabungan Rakyat Sabah (GRS) coalition led by him, winning the state election.

Based on his latest speech, he is actually an epitome of what politicians should do when campaigning under the new normal of Covid-19 when he stressed on arrival at campaign venue, he went straight to the stage without shaking hands or talking to attendees at close quarter and when his speech has ended, he went straight to his car and left the venue.

And he began all his campaign speeches with an appeal for the attendees to observe physical distancing and to put on masks which he himself put on. But he could see that his appeal went on deaf ears, perhaps this experience of being nice and gentle which was not reciprocated, had motivated him to say in a humorous way in his speech, “sorry, if I have to start to use the rotan.”

Politicians of all hues together with their cybertroopers in the social media had a field day using this phrase to “rotan” him back.

Muhyiddin’s management of the Covid-19 pandemic and the recovery of the economy has in general received plaudits from the majority of Malaysians, as shown by many recent polls. Malaysia is also recognised internationally as one country that has done relatively well in this area.

Where mistake lies, it is in his inability to rein in his Facebook-addicted ministers to not give any reason to the rakyat for not observing the SOPs.

The rakyat could see clearly in the pictures posted by these Facebook-addicted ministers that in doing their noble job as a minister, they wantonly breached SOPs by not putting on face mask or observing physical distancing.

Hence, there is some truth in netizens’ comment that before he wants to jokingly “rotan” the rakyat, he should seriously consider ‘rotan’ his ministers first.

But this does not detract from the fact that he is locally and internationally recognised as doing a better job in managing the pandemic and the recovery of the economy than the previous government especially in attracting foreign investment despite the Covid-19 pandemic where the economy is in a lockdown from March 18 to May 4.

In a media release yesterday, the Malaysian Investment Development Authority (Mida) said for the period of January to June 2020, Malaysia recorded total approved investments of RM64.8 billion in the manufacturing, services and primary sectors. Of these, foreign direct investments (FDI) made up RM19.5 billion or 30.2 per cent.

This came about because of the government’s commitment to further cement the country’s position as a preferred destination for FDIs by establishing a One-Stop Centre (OSC) at Mida.

The OSC will evaluate and approve applications by eligible business travellers to enter Malaysia for trade and investment purposes. These travellers will be required to offer evidence of compliance to the strict SOPs and other necessary conditions such as quarantine measures, which are presently in place.

Although the main purpose of the OSC is to facilitate genuine business travellers, this will only be undertaken while primarily upholding, protecting and preserving the health and safety of the Malaysian people.

The OSC commenced its operations on October 2 and is managed by Mida with representatives from the Immigration Department, Ministry of Health and Ministry of International Trade and Industry (MITI) to ensure the legitimacy and health status of business travellers prior to their entry into Malaysia.

Since commencing operations just a few days ago on October 2, the OSC has received 221 applications from business travellers, out of which 207 has been approved.

On the Batu Sapi by-election, if it’s going to be held, the key takeaways from the Sabah state election is there should be sufficient officials monitoring and implementing the SOPs especially the putting on masks and physical distancing during campaigning and ceramahs.

Stern action (“rotan”) should be taken against those infringing the SOPs. Better still, inflict a hefty fine on the political party organising the campaigning and ceramah that has failed to ensure the SOPs were observed.

Now the big question is, who should be the officials monitoring this — the Ministry of Health or the EC? I leave it to them to decide.

e-Hailing companies should do more in helping drivers
Previous Higher fiscal deficit is needed for tough times
Next