Empowering the rural economy on the road to self-sufficiency

We need to have both forms of agricultural “protectionism” and “liberalisation” executed in tandem and synchronisation. 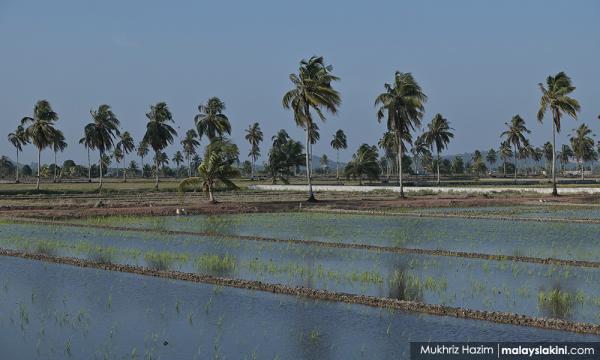 Eradicating rural poverty should be linked to self-sufficiency in our food security (agriculture) albeit to be sure not necessarily across the board, and this, in turn, entails empowering the rural economy (and by extension the economy as a whole) to be “self-sufficient”.

The link between rural poverty eradication and agriculture has always been recognised under successive Malaysia Plans. For example, under the Third Malaysia Plan (1976-1980), agriculture remained “the dominant sector of the economy” essential for “the attainment of the objectives of the New Economic Policy (NEP)”.

Nonetheless, a self-sufficient rural economy requires concerted and sustained State planning and intervention/pro-active measures – that go beyond the formulation of national strategic blueprints such as the Malaysia Plans.

It also means that we need to strike the right/appropriate balance between our domestic needs and exports – between what might be called an “import-substitution” agriculturalisation and export-oriented agriculturalisation, at least over the medium-term period (5 years).

This is to give our local agricultural sectors and related industries time to grow and develop, and which could be measured by our import dependency ratios (IDR) and self-sufficiency levels (SSLs).

If need be, the State must be prepared and committed to:

In other words, we need to have both forms of agricultural “protectionism” and “liberalisation” executed in tandem and synchronisation.

In protecting our agricultural sector, as part of the agenda to eradicate rural poverty, we need to tackle the issue of speculation and financialisation of food produce head-on.

This has to do with the transformation of forwards and futures contracts on which both the farmer/food producer and the markets depend for price stability (future) and discovery (spot) – paralleling the abuse of APs – as embodied by “derivatives”.

We should learn from the Great Food Crisis of 2008 (which badly affected Malaysia also) – which followed the onset of the Great Financial Crisis when the derivatives on mortgage-backed securities (MBS) such as credit default swaps (CDS) and collateralised debt obligations (CDOs) “exploded”. As primarily epitomised by the hedge funds, the speculators turned their attention to food crops/commodities.

When speculative activities in the international clearing markets that distort prices (and encourage hoarding activities in turn) are effectively addressed and regulated, then input costs and essential/strategic food commodity items wouldn’t be subject to wild fluctuations and held “hostage”.

On the one hand, there’s price gouging by cartels at the international level but on the other hand, there’s also the speculators acting in concert with each other to manipulate prices for their financial benefit.

Sometimes, the speculator is the middlemen and vice-versa (i.e., when there are futures and forward contracts involved).

Needless to say, both speculation and profiteering distort the market (instead of blaming subsidies as is usually the case in the mainstream).

This isn’t at all to diminish the role of supply-side and supply-chain bottlenecks but merely to point out the other reality.

Our poverty eradication agenda as embodied by the New Economic Policy (NEP) – of which a drastic/radical update and “inversion” (up-side down reforms) are sorely needed – shouldn’t be hampered and held back by geo-financial vicissitudes when this is something that’s even more within our control (internationally and domestically).

For example, the Bursa Malaysia Derivatives or BMD (as a result of a merger of the Kuala Lumpur Options and Financial Futures Exchange or Kloffe and the Commodity and Monetary Exchange of Malaysia or Commex) is a highly open futures market with a high degree of foreign interest.

Therefore, we might need to further regulate this area by imposing certain requirements for foreign speculators (i.e., through the Chicago Mercantile Exchange (CME) trading platform).

One of which is the condition that there must be physical purchases of stocks (the underlying assets), i.e., crude palm kernel oil (CPKO), which can also be used to make chicken feed. That is, no cash settlement, physical settlement only (at the clearing process).

In turn, these underlying assets must be sold back to local buyers within a specified time-period (i.e., an additional contract that can’t be longer than three months).

This practice could be replicated once BMD is further liberalised to allow for trading in rice and other food items.

This purely market-driven process has to run in parallel with acute State intervention – i.e., the State as the stockpiler-of-the-last resort (to ensure that prices don’t deviate too much).

As such, our agricultural sector and, by extension, the rural economy would be both open and protected at the same time/simultaneously.

To begin with, the “changes” need to occur on a more fundamental level, i.e., domestically.

Although rural poverty has reduced to 12.4% on the whole, pockets of deprivation still exist in both West and East Malaysia.

The competition between agricultural and industrialisation policies saw the former giving way to the latter – in terms of land use and space.

And within the wider agricultural sector, commodities took priority over food crops.

There’s a need for a paradigm shift and solution to resolve the policy and existential tensions.

One in which we need to rebalance our national strategic portfolios to accord greater space to food agriculture as a matter of human and national security (like climate change, for example) on the back of 4IR (Fourth Industrial Revolution) technology or digitalisation such as Internet-of-Things (IoT), Big Data artificial intelligence (AI) and robotics – to allow for spatial overlap (i.e., multi- or inter-cropping).

When the NEP was first introduced in 1970, agriculture’s share of the economy accounted about 30% or roughly one-third of the country’s GDP but has since declined to 10.5% in 2000. According to the Department of Statistics Malaysia (DOSM), agriculture contributed only 7.4% in 2020.

Within the wider agricultural sector, the agro-food sub-sectors’ contribution was at 48.2% in 2020, valued at RM52 billion.

The current inflation phenomenon has heightened the exposure to our food insecurity and vulnerability to price shocks – heavily dependent as we are on food imports.

By inclusion, inflationary pressures have severely impacted our farmers as they’re hit by a triple whammy of rising feed costs, prolonged labour shortages, and continuing price ceilings/controls – all of which eats into their already thin profit margins.

For example, a padi planter under the Muda Agricultural Development Authority (Mada) in Kedah – which contributes somewhere between 40% to 45% of the nation’s total padi output – now has to pay RM78 for fertiliser which used to cost RM50. Pesticides hitherto costs RM48 but is presently selling for RM90.

In 2016, the average or mean income of padi planters under Mada was only a meagre RM2527 per month.

It has to be highlighted that in addition to such disproportionate levels of income, most of the padi farmers are also in debt to both government and private entities.

It’s reported that 300,000 padi planters are “drowning” in debt and, hence, the problem becomes inter-generational and, by extension, structural.

The trend is also similar for other farmers – be it vegetables or poultry, etc.

On top of that, there’s the structural issues of the middlemen – cartels and monopolies – that are more often than inextricably linked to political connections (which isn’t limited only to the APs).

In short, the global cost-push and supply-side inflation has only worsened the structural woes faced by our agro-food farmers – the unsung heroes of the nation.

Efforts to improve the situation can be made through the systematic expansion of contract farming, i.e., directly between the farmer and manufacturer or retailer (without the intermediation of the middlemen) – of which the Pertubuhan Peladang Kawasan (PPK) of Kuala Langat is an eminent example (“Agri-Tech Malaysia – Onward and Upward”, EMIR Research, April 15, 2022).

Contract farming has also been practised in the broiler chicken industry since the 1980s (see “The Impact of Public-Assisted Contract Farming Programmes in Malaysia”, Journal of Agribusiness Marketing, Vol. 7, 2015). The integrators (e.g., multinational companies/MNCs in food manufacturing) provided basic inputs like day-old chicks and feed to the farmers. In turn, the farmers agree to sell back the fully grown broilers to the integrator at mutually agreed prices.

Contract farming would improve the efficiency of the supply chain and increase farmers’ income and profit. It’s therefore superior to government subsidies.

This form of supply chain management (SCM) allows farmers to be connected to the global value chain (GVC) via MNCs and other private sector players.

A more integrated SCM will ensure competition among supply-chains, whether anchored by the public sector as via Fama or the Federal Agricultural Marketing Authority or private sector via the cartels, monopolies and oligopolies (rather than old/conventional system of within the supply chain) – where digitalisation will ensure the winning edge.

It’ll also empower farmers with the critical exposure to market supply and demand dynamics in real-time since any information asymmetry is removed.

Empowering farmers with contract farming is key towards achieving a sustainable and self-sufficient rural economy. Wakeup Call: Brain Drain is only a symptom
Next