There should be discussions with relevant parties to solve issues or address concerns, before making broad stroke public statements that can be misunderstood and politicised. 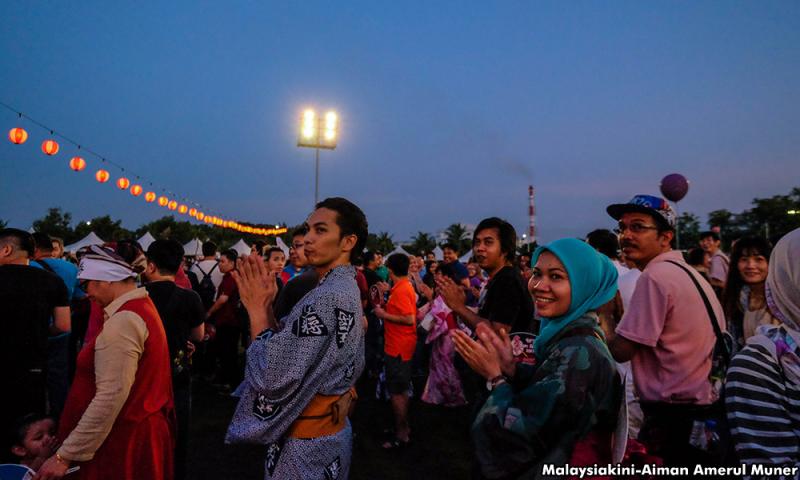 Relative to the long list of problems Malaysia is facing, permissibility for Muslims to attend the Bon Odori festival is certainly bottom-tier, if not a non-issue. But, given the unexpected attention it has garnered, leading to misunderstandings and politicisation of the topic, it’s important to shed some light on the matter.

There should be discussions with relevant parties to solve issues or address concerns, before making broad stoke public statements that can be misunderstood and politicised.

Japan’s public relations office referenced an expert in Japanese traditional dance, Bijo Ageha, who pointed to a Buddhist chanting ritual that looks like a dance, dating back to the Kamakura era (1185–1333) as the roots of Bon Odori.

According to Miura and colleagues (researchers from Japanese universities), Bon Odori is “a type of Japanese folk dance performed during the annual Buddhist festival called O-Bon (or simply Bon)”.

In the modern era, Bon Odori is mostly identified as a summertime dance festival, held annually throughout Japan as both entertainment and family reunion, while preserving centuries-old Buddhist-rooted spiritual tradition to appease the souls of the deceased.

Therefore, the dance has religious roots, but how much of it is still being practised outside of an annual dance festival and outside of Japan? This is something for the authorities to verify.

It has been reported that the Malaysian Islamic Development Department (Jakim) conducted a “study” which found that the festival does have religious elements, which may not be inaccurate.

Subject to their findings, perhaps it is more apt to suggest a non-advisable stance for Muslims not to participate in specific spiritual/religious rituals associated with the dance and the chants, rather than the entire event itself.

If the potential harm to an individual or society is more than any potential benefits, if any, then that provides the basis to label it as not permissible, or Haram, such as consuming alcohol, smoking cigarette, engaging in prostitution, gambling etc.

“They ask you about drinking and gambling. Say, “There is great harm in both, though there is some benefit also for the people. But the harm of the sin thereof is far greater than their benefit” (Qur’an 2:219)

On this note, it is important to understand that Jakim never said it is not permissible (Haram) to participate. The religious body merely conducted a study (as claimed), and the result is used as a basis by the Minister in the Prime Minister’s Department (Religious Affairs) to advise against it.

This indicates that the authority’s “study” on the event found a relatively lower level of potential harm to participants, not enough to deem it not permissible.

The presence of any risk, be it physiological, psychological, or even spiritual, may call for religious authorities to provide their views and stance on the matter, as the Muslim population may rely on their guidance pertaining to the permissibility of attending the festival.

As far as this goes, and aside from the questionable timing and the resulting diversion of the public from more critical issues the nation is facing, the statement from said minister may not be totally uncalled for.

However, the broad statement could’ve been refined to put more focus or confine the “non-advisable to participate” stance to the dance/chants itself instead of the entire festival.

For a multi-religious and multi-racial nation, it’s advisable that any statements on such issues are provided with full context, deeper explanation and with sensitivity to non-Muslims and other nations. Otherwise, it would risk the teachings of Islam being misrepresented and the religious authorities being labelled as ignorant.

Also, as far as “not-advisable” goes, why stop at Bon Odori? There could be many other places and events which may confer similar “harms” or “risks”. In fact, spiritual/religious elements also exist in Chinese New Year, Deepavali, Christmas etc. and yet these events are recognised as national public holidays.

For the benefit of the non-Muslims and to avoid misunderstanding of Islam, it is important to know some of the core Islamic teachings relating to the issue:

“O mankind, We have created you male and female, and appointed you races and tribes, so that you may know one another. Surely the noblest among you in the sight of God is the most God-fearing of you” (Qur’an 49:13)

“Allah does not forbid you from dealing kindly and fairly with those who have neither fought nor driven you out of your homes. Surely Allah loves those who are fair. Allah only forbids you from befriending those who have fought you for ˹your˺ faith, driven you out of your homes, or supported ˹others˺ in doing so. And whoever takes them as friends, then it is they who are the ˹true˺ wrongdoers” (Qur’an 60:8-9)

There are many authentic narrations (hadiths) concerning relations with neighbours, and it is important to note that these do not concern only Muslim neighbours.

For example, from Ṣaḥīḥ al-Bukhārī 6014, Ṣaḥīḥ Muslim 2624, A’isha (May God be pleased with her) reported: “I heard the words of the Messenger of Allah (peace and blessings of Allah be upon him): “Jibrail (archangel Gabriel) strongly advised me (to treat) my neighbours with kindness, so I thought that he will even persuade me to give them (the right to) an inheritance”

In the situation with Bon Odori, perhaps it can be seen as a neighbour’s invitation. Therefore, it is important to clearly understand that visiting the festival in itself is not tantamount to the recognition of a festival or rituals that are not related to Islam. This is only a manifestation of respect and good neighbourly conduct, in accordance with the Prophet’s behaviours and actions.

Dr Yusuf al-Qaradhawi did not specifically mention dancing in his book “The lawful and the prohibited in Islam”, but we can draw conclusions from his views regarding movies and dramatic performances and the like.

Al-Qaradhawi opined that these could be permissible under the conditions that the content must be free of sin and immorality i.e., that which is against the Islamic beliefs, morals, and manner. He further added that portrayals which excite sexual desire, glorify crime, propagate deviant ideas, false beliefs and the like are haram.

Other conditions al-Qaradhawi outlined include the risk of neglect of religious obligations or worldly responsibilities, and physical intermingling between opposite genders.

We can also draw conclusions from al-Qaradhawi’s stance regarding singing, which could be extended to dancing and chanting associated with Bon Odori where he referenced Ibn Hazm making the following statements:

“The Messenger of Allah (peace be upon him) said, ‘Deeds will be judged according to intentions, and everyone will get what he intended’.

“…And he who listens to singing intending neither obedience nor disobedience is doing something natural and harmless, which is similar to going to the park and walking around, standing by a window and looking at the sky, wearing blue or green clothes, and so on.”

Thus, religious authorities should also add in their statements that what is more important is what the Muslim person does at the event and what his/her intentions are.

For example, it could be considered haram if the song is inviting people to associate God’s divinity with others and/or done “in conjunction with haram activities” such as a drinking party or other obscenity such as nudity and drugs.

Thus, Jakim should release the findings of the study, to show details of what a typical Bon Odori festival entails and the harms/risks it had assessed. For example, does the event provide higher access to alcohol or other excesses? Are the dance and chants still being used for spiritual/religious reasons and are the contents of these chants against Islamic teachings? Or are they purely cultural? Is there evidence of such risks/harm based on previous events?

If their findings clearly show that a typical Bon Odori festival in Malaysia entails personal and societal “harm” by Islamic standards as mentioned above, then perhaps the authorities should first engage with Japanese authorities or the local organisers to discuss the issue.

Given Malaysia’s Muslim-majority societal makeup, the objective between the parties should be an understanding of how the event should be organised and handled so that these perceived harms or risks can be minimised, if not entirely negated, for Muslims to not only attend but perhaps even participate in harmless cultural events, alongside non-Muslims.

Should, for whatever reasons, both parties are not able to come to a mutual understanding, local authorities can provide their ruling publicly, be it “non-advisable” or even “not-permissible” for specific elements of the event, if any.

This way, Muslims may still attend the festival in the spirit of neighbourly respect and inclusivity, while being aware of Islamic boundaries as informed by religious authorities.

In this regard, His Highness the Sultan of Selangor’s call for the Selangor Islamic Religious Department (Jais) and Shah Alam’s City Council to attend and observe the event themselves to make better judgements appear to be a more favourable move.

In the meantime, and in the spirit of not diverting from more pressing issues, politicians should know that many other practices in Malaysia are certainly haram—such as corruption—and a much more serious national concern compared to Bon Odori.

If there are still uncertainties or debates surrounding the risk of religious elements in Bon Odori that may or may not be considered a harm or risk to Muslims’ faith or Islamic creed, there are certainly no questions that idolising wealth, power, and status—positioning these above the true teachings of Islam, therefore, above God—is a form of shirk and that it corrupts one’s faith, as alluded to by Prof Emeritus Tan Sri M. Kamal Hassan’s in his book “Corruption and Hypocrisy in Malay-Muslim Politics” published my EMIR Research.

On this matter, Dr Yusuf al-Qaradhawi pointed out a verse in the Qur’an and also a narration by the Prophet (peace be upon him) as follows:

“And do not consume one another’s wealth unjustly, nor deliberately bribe authorities in order to devour a portion of others’ property, knowing that it is a sin” (Qur’an 2:188)

“The Prophet (peace be upon him) said, ‘Allah’s curse is on the one who offers a bribe and on the judge who accepts it.’”

As a “food for thought” regarding the use of religious rhetoric as part of the “brand” of a political party, Prof Kamal also mentioned the following:

“Therefore, the party behaves in public as if it has acquired religious legitimacy strong enough to justify or compensate for whatever morally-compromising political behaviour, decisions or strategies it has to make in order to gain popularity and garner political support.”

“As Muslim politicians are also Believers, they have to make sure that their love or devotion for the party, their party’s goals, their leaders, their constituencies or their wealth, power and status is placed below that of their love and devotion to Allah SWT, the Noble Messenger (s.a.w.) and striving for Allah’s causes.”

Now that we have indulged ourselves in this apparent diversion, let us move on to tackle more important issues that would have a far greater impact on changing the grave trajectory of the nation.

Dr Rais Hussin and Ameen Kamal are part of the research team at EMIR Research, an independent think tank focused on strategic policy recommendations based on rigorous research. Putting the Gini back in the bottle
Previous An efficient bus network - critical in breaking the traffic gridlock
Next