More choice for Johorean voters: But will this make a difference?

Political parties and independent candidates have to resonate concerns and worries among Johoreans to win their hearts once again. 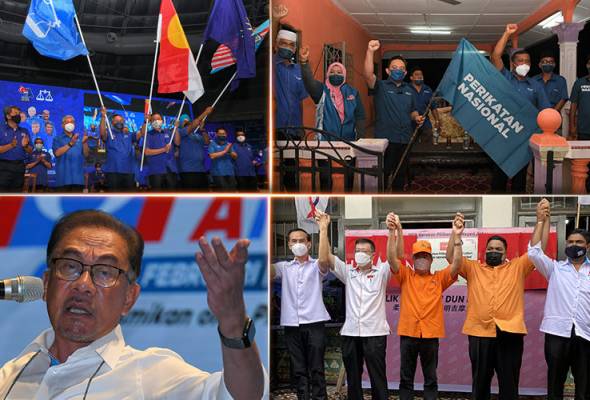 Ever since the dissolution of the Johor state assembly on January 23, the contesting parties had been mobilising their grassroots and electoral machinery to prepare for the soon-to-be-held polling day come March 12.

The rising Covid-19 cases during the Chinese New Year (CNY) season did not hinder party luminaries/heavyweights and apparatchiks from the other states coming over to Johor to assist their counterparts in campaigning and strategising for a narrative that would stand out among the competing messages and clinch the support of Johor voters against the backdrop of what is now a crowded electoral field.

Many politicians also capitalised on the CNY period to reach out to Johoreans by distributing mandarin oranges and masks. However, it seems that this has not generated much excitement and buzz among Johoreans who are struggling to make ends meet due to the Malaysia-Singapore border closure lasting for over two years.

The surrealism surrounding the political instability at the federal and state governmental level would have also caused Johoreans to be relatively disillusioned with the current state of politics and, by inclusion and extension, the established party coalitions which are themselves beset by internal squabbles and factionalism.

Perhaps this is why the Malaysian United Democratic Alliance (Muda) and Parti Bangsa Malaysia (PBM) as the newly-established parties together with Warisan which are seeking to contest in Johor for the first time could be a “breath of fresh air” on the political and electoral landscape. Notwithstanding, in reality, many Johoreans still do not have a clear and distinct idea of the political ideologies of these parties, what concrete or fleshed-out policies they will bring to the table and what initiatives they intend to implement to help Johoreans overcome their economic woes.

Perhaps too, the addition of new parties to the electoral equation might make for more political uncertainty and confusion – exacerbating Johoreans’ anxiety about the political (and economic) future.

Johoreans may decide that, after all, their votes would not make any difference in upcoming state election. Many of them have yet to decide which alternative party or coalition to vote, if at all. Some of them – instead of voting on the basis of party lines – plan to critically evaluate the quality of the individual candidates first before casting their votes on March 12.

The current behaviour among voters is different from the 14th General Election (GE14).

During GE14, many voters stationed overseas or other states returned to their respective constituencies to vote for the then Pakatan Harapan (PH) coalition comprising the Democratic Action Party (DAP), Parti Keadilan Rakyat (PKR), Parti Amanah Negara (Amanah) and Parti Pribumi Bersatu Malaysia (Bersatu). Eventually, Johor became one of the (frontline) states that contributed to the toppling of the Najib administration and PH became the state government.

However, this only lasted for some 22 months. Johor experienced a change of state administration right after the fall of PH at the federal level in February 2020. Arguably, political developments during the past two years have ostensibly changed the mindset of voters – a gradual process if statistically significant. They either choose not to vote, or they prefer to vote the candidate over political party.

With the Undi18 that came into effect on January 16, an estimated 1.2 million Johoreans aged 18 to 21 this year would be able to fulfil their civic rights and vote during the upcoming Johor state election. This poses both a strategic opportunity and risk-laden uncertainty to all the contesting parties as the intention among Johorean youths on which party or candidate to vote is still largely unknown and cannot be taken lightly or for granted.

According to the Election Commission (EC), there will be a 30 percent increase in new voters in Johor.

Many political leaders would be aware of the electoral potency and voting power of the Undi18 batch/bloc in the Johor election. However, intriguingly, none of the political parties, including youth-centric Muda, specifically mentioned concrete policy solutions – particularly to address issues impacting the younger voters such as youth unemployment, financial literacy and educational levels/skills development.

Despite being a new face, brimming with idealism, and unbridled with past baggage, Muda has yet to satisfy curious or cynical minds. To provide some sense of what is expected or demanded, perhaps it is germane to reproduce the five questions raised by Suara Rakyat Malaysia (Suaram) adviser Kua Kia Soong under his recently written piece (“Racial young or same old, same old?”, February 19, 2022) in Malaysiakini which are as follows:

Now, the above questions could be summed up more broadly and generalised and the logic extended as to whether candidates fielded by political parties or standing as independents can effectively provide solutions for their constituents in their respective constituencies. This remains to be seen.

No doubt that most of the independent candidates contesting during the past three state elections in Sabah, Melaka and Sarawak previously had policy ideas and proposals to improve on the respective existing state policies. Unfortunately, they could not run their campaigns effectively due to pandemic restrictions and funding constraints. As a result, they were not well-recognised by the public.

It could be postulated that the political landscape has changed dramatically since, especially after the Melaka and Sarawak state elections.

Barisan Nasional’s (BN) confidence was given a booster shot by the results of the Melaka state election. BN comprises not only the United Malays National Organisation (Umno), Malaysian Chinese Association (MCA), Malaysian Indian Congress (MIC) and Parti Bersatu Rakyat Sabah (PBRS) but also friendly parties such as Makkal Sakti which is keen to contest in the Johor state election.

Like in Melaka, BN will face-off against Perikatan Nasional (PN) – their federal government partners – during the upcoming Johor state election.

However, this may only serve to complicate the electoral landscape in Johor. This is due to the impression or “vibes” being projected (rightly or wrongly) of an opposition that is disunited at two levels, namely among the coalition partners and within the parties themselves – accentuating the image of incohesion. Besides this, the rest of the opposition parties such as Muda, Warisan, PBM and Pejuang will deploy their own logos.

On the electioneering as encapsulated by campaign slogans and taglines, we have “Restart Johor” from BN and “Johor Bangkit” from PH and Muda. But, as it is, so far none of the political parties have addressed the border closure and bread-and-butter issues in a comprehensive or prominent way.

Nonetheless, it is not too late for the contesting parties or even the independent candidates to strategise their campaigns to strike a chord with and tug at the heartstrings of Johoreans concerning the real issues that matter “on the ground” (what EMIR Research – based on our “pulse from the ground” research – call the “perut economy”).

If political parties and independent candidates make headway with the hearts and minds of Johoreans by resonating with their concerns and worries during the next two weeks of the campaign period, they would have a higher chance to win and form the next Johor state government. Whither Malaysian 5G Rollout
Next