The injustice of stereotyping Malaysia as a failed state

Both Malaysia and the US are classified by the ranker as two of the 34 more stable countries despite the US’ superiority in GDP and its advanced health... If Daniel Moss of Bloomberg has accurate facts on his hand by just working harder to look at the latest ranking of the Fragile States Index (FSI 2021), he would not have been gloating in his article that Malaysia is staggering down the road to failed statehood.

The FSI which began life as the Failed States Index 17 years ago is published by Fund for Peace, a US-based non-profit organisation, which ranked 179 countries according to its fragility, with Yemen in the number one spot as the most fragile state and Finland at the bottom being the least fragile state for 2021.

And as Bloomberg is a US-based news media, Moss should have been more concerned the FSI index has highlighted the country which saw the largest year-on-year worsening in their total fragility score this year is the US, which may have a negative impact on Bloomberg’s fortune.

The US’ score in the index has increased by 6.3 points which earns it a rare distinction of being the most worsened countries in 2021– a higher score denotes countries staggering down the road to a fragile statehood, while a lower score shows improvement from fragility.

“Over the past year, the US saw the largest protests in the country’s history in response to police violence which were often met by a heavy-handed state reaction along with sustained efforts to delegitimize the election process, which escalated violently in early 2021.

“Despite the country’s abundant material wealth and an advanced health system, political polarisation, a lack of social cohesion, Congressional gridlock, and misinformation contributed to a failed response that left over 350,000 dead by the end of the year (2020) and a steeper contraction in GDP than any time in the past 60 years,’’ says the FSI report.

So where does this put Malaysia whom Moss has arrogantly and mischievously mocked as a country staggering down on the slippery road to a fragile statehood?

Malaysia is in the 123rd position with ayear-on-year improvementin its score that decreases by 0.7 point. Although the US is ranked 143rd, better than Malaysia, yet both countries are classified by the rankers as two of the 34 more stable countries despite the US’ superiority in GDP and its advanced health system.

The total score Malaysia obtains is 56.9 points. In contrast, Yemen as the most fragile state, scores 111.7, while Finland scores 16.2 as the least fragile state. Out of the 10 Asean countries, Myanmar is the number one fragile country in Asean with a world ranking of 24th (93.8 points) followed by the Philippines (world ranking 49th with 82.4 points) and Cambodia (world ranking 54th with 80.6 points).

Although the Covid-19 pandemic weighs heavily in the current ranking and is seen as levelling the playing field, the reports identified three key patterns and trends in nations staggering down the slope to a failed state:

– Many of the assumptions and beliefs that were widely held before the pandemic did not panned out and must now be reassessed at a fundamental level;

– The pandemic was not a shock only to public health systems but instead both pandemic and public health impacted each other, and were themselves shaped by economic, political, and security considerations; and

– While Covid-19 often dominated our collective attention, other long-term pressures did not sit idly by but continued to have their own effects, in ways both expected and unforeseen.

This was not seen in the way Moss analysed the issue in his op-ed in coming to his shallow conclusion that Malaysia is on its way to being a failed state. Instead, he built up his argument from the White Flag movement, which he saw as the failure of the government in its responsibility to the rakyat to provide them with the basic necessities of life.

It beats us why he can’t fathom the White Flag movement as an attempt by the rakyat for an equality of sacrifice to share the burden of governance with the government in an unprecedented pandemic.

Meanwhile, before the pandemic, many wealthy and developed countries with superior economic wealth, technical expertise and a greater capacity to prevent and manage large risks, including public health threats were thought to be impossible to be severely impacted by these risks.

However, the fact is many of these developed nations have been among the most severely impacted and have had their fragilities and fault lines clearly exposed. Others, including those too often side-lined or ignored, have demonstrated a remarkable resilience from which the rest of the world can and should learn.

Just as the pandemic raises prejudices about the binary dividing line between fragile countries and those that were not, so does the idea that its effects and response efforts can be limited within the confines of public health.

Outside the health sector, the economic impact was most visible as the global lockdowns contributed to falling oil prices, supply chain disruptions, and the world economy went into recession, with GDP contraction in many places much steeper than following the 2008 economic crisis.

The ripples of the pandemic’s direct and indirect effects soon spread further beyond, reaching more areas of public and private life, in some cases became the first domino in a series of events that ignited more longstanding and deep-seated grievances.

The response to the pandemic were also not simply a function of disseminating public health resources as efficiently as possible, but depended on social, economic, political, information, and ethical factors. While the pandemic sometimes pushes other problems out of the front pages and down the priority list, the challenges that preceded it don’t just disappear.

It would be good if the government uses these indicators of the FSI with modification and adaptation to local context as an early warning signals of failed policies or policy paralysis to buck the trend against falling into a failed state pathway, much in the same way an Airborne Warning & Control System (Awacs) is used for surveillance and control centre for air defence. With such a system, self-correcting measures can then be undertaken which requires the administration to have a good listening ear.

To begin with, the government should have a crystal-clear plan and an equally crystal-clear communication mechanism so that all can follow and adhere to the game plan of beating the virus without exception and without any fear or favour! The focus must be — managing the pandemic, economic recovery and mitigating political conundrum! It’s people, people and people.

It is thus very critical for the government to have a holistic strategic communication team that functions proactively mainly, and reactively, sometimes, to help provide clarity in communication to the public. Failing which confusing narratives will be the norm!

And finally, while the political elites of the country should also give constructive criticisms of the government as their contribution in giving an early warning signal against a fragile state, they should nevertheless refrain from labelling the government as a failed government just for the mere purpose of politicking.

It is from such labelling that the likes of Daniel Moss from the foreign media will irresponsibly develop their own agenda to evolve that idea into a failed state, despite facts to the contrary.

Dr Rais Hussin and Jamari Mohtar are part of the research team of Emir Research, an independent think tank focused on strategic policy recommendations based on rigorous research. 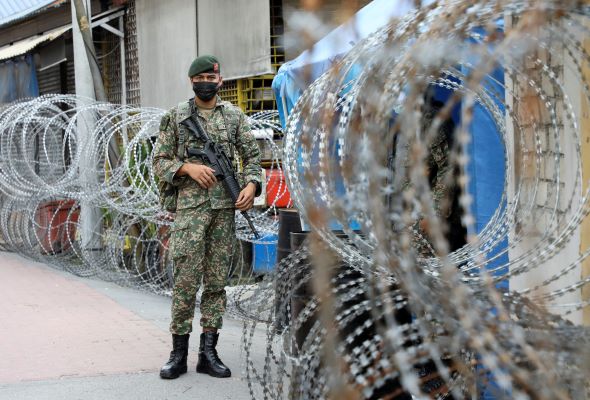 Simultaneous containment and controlled reopening through tech-powered mass testing
Next