Biden presidency, ”deal of the century” and the two-state solution

A Biden administration will initiate a move away from the direction of the past four years under Trump. 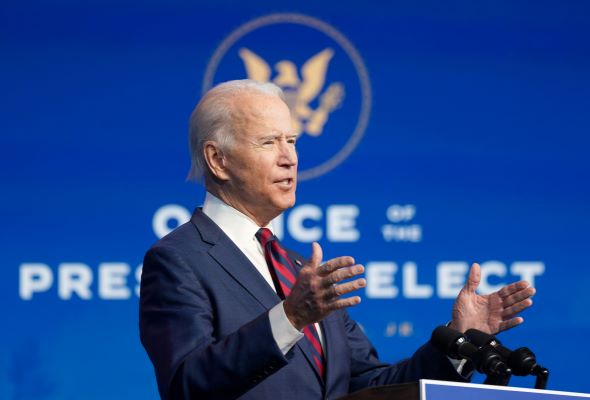 WITH the confirmation and endorsement of the 2020 US presidential election results by the Electoral College, will Trump’s much trumpeted “Deal of the Century” (DOTC) that is meant to be a gamechanger in the Middle East now dead in the water for the second time – this after Netanyahu’s avowed intention to de facto annex (parts of) the West Bank by July 1? Will Joe Biden now finally jettison this so-called grand vision and plan for the two-state solution where a secure State of Israel co-exists with a viable State of Palestine? Or will he bow to pressure by the American Israel Public Affairs Committee (AIPAC) and appease the American Jewish constituents by seeking to revive the DOTC?

To recap, the DOTC was about Israel, in effect, retaining more than one third of the West Bank for security and defence purposes so that the State of Palestine – which is already divided into the Gaza Strip also – will become more non-contiguous than before with the allocation of a narrow strip of land bordering Egypt (i.e., in the Negev desert) connected through extremely narrow land corridors to Gaza for industrial and agricultural purposes. Approximately 97% of Israelis in the West Bank will be incorporated into contiguous Israeli territory.

There’s a possibility that Biden will not bother with reviving the DOTC despite pressure from the Jewish/Zionist lobby on the basis it doesn’t represent a fair deal to the Palestinians and also a stumbling-block to a permanent or viable or definitive peace settlement between the two States as well as the wider Middle Eastern region.

• slow down the expansion of settlements that accelerated under Trump; and

• encourage Arab countries to pursue new normalisation agreements with Israel that will attach conditions which would benefit Palestinians. Examples include re-opening the shuttered Palestinian mission in Washington, restoring funding to Palestinian refugees, and establishing a second US consulate for the Palestinian Authority (PA) in East Jerusalem.

However, it’s equally plausible that the opposite might be the case. In an article in Middle East Eye entitled, “Biden will not end the ‘deal of the century’ – Palestinian leaders are acting in haste” (Nov 24, 2020), Joseph Massad makes a good case for that view by highlighting that the President-elect “has vowed not to move the US embassy back to Tel Aviv, nor to rescind US recognition of Israel’s illegal annexation of that city. Perhaps the only difference is that Biden may restore aid to the PA, while curtailing support to families of Palestinian prisoners – details of which are “being hammered out in Ramallah”.

It’s to be recalled that neither the DOTC was pledged by Biden during the presidential campaign for a complete overhaul or revamp nor was it mentioned post-presidential election as part of his foreign policy brief. Biden hasn’t prominently commented on the de facto annexation of about a third of the West Bank that was called off as part of the normalisation deal with the United Arab Emirates (UAE) and Bahrain, although it’s still debatable whether it’s been altogether stopped or merely delayed in terms of the specific details.

The Middle East Institute – in its Biden transition series policy commentaries – has called on the President-elect to pull back from the DOTC and express “renewed commitment to the two-state solution …”. In the same article entitled, “Biden could generate momentum for Israeli-Palestinian peace”, the Middle East Institute also urged that the Biden administration “… build trust with the Palestinian Authority and heal the rupture that Trump has caused”.

The Middle East Institute is hopeful that a multilateralist Biden administration would promote the formation of an updated version of the Quartet (comprising the US, Russia, the UN and the EU). The main purpose is to provide a forum and space for key European and Arab players “… to engage with pro-peace Israelis and Palestinians who can articulate the needs of both peoples to the international community” and thereby strengthen the move towards a two-state solution. The updated Quartet would build upon existing policy documents such as the Clinton parameters, the Bush roadmap and the Arab Peace Initiative.

In the final analysis, it’s advisable that the DOTC be unequivocally abandoned by the Biden administration for the sake of the Palestinians who rightly view it as wholly one-sided even with good intentions. A Biden administration is in a position to pull all the stops and levers to dissuade Israel from either de facto annexing the West Bank or reviving the DOTC by most prominently repairing ties with Iran and resuming the nuclear deal that was first initiated under Obama or enter into a new one perhaps on more favourable terms. This could well be both the trump card of the Biden presidency as well as a form of deterrence vis-à-vis Israel. Anyhow, President-elect Biden is on the record as saying that the US intends to rejoin the Joint Comprehensive Plan of Action (JCPOA) that Trump pulled out from in 2018 and lift sanctions if Tehran “returns to strict compliance”.

After all, despite its silence, Israel is the usual suspect in the latest assassination of an Iranian nuclear scientist which should give Biden the added lever that he can use on Netanyahu.

If Israel abandons its de facto annexation plan or changes its mind about the DOTC, then in turn the Biden administration could proceed to beef up the JCPOPA by adding new conditions that would be multilateral in nature (i.e., allaying and consistent with the concerns of the EU, the International Atomic Energy Agency or IAEA, UN Security Council Resolution 2231 of 2015 endorsing the JCPOA, etc.) which should also be reasonable to Iran. In addition, a Biden presidency might be amiable to the multilateral Hormuz Peace Endeavour (HOPE) initiated by Iran which invites its neighbours to discuss their regional security concerns, as per Iranian Foreign Minister Javad Zarif. In lieu of direct involvement of world powers, HOPE has called for a higher international body, such as the UN Security Council, to endorse the outcomes of the talks.

While still too early to speculate, it’s almost certain that when it comes to the DOTC and the two-state solution, President-elect Biden will craft a renewed approach and roadmap based on multilateralism and consensus, and a more balanced perspective that will ensure the voice of the Palestinians are heard, respected and taken on board.

Perhaps there’ll be Biden’s own version of the DOTC that is finally acceptable also to the Palestinians and which would therefore be a stamp of his presidential legacy? Housing as both a 'human right' and policy priority
Previous Halal meat scandal – blockchain technology to the rescue?
Next