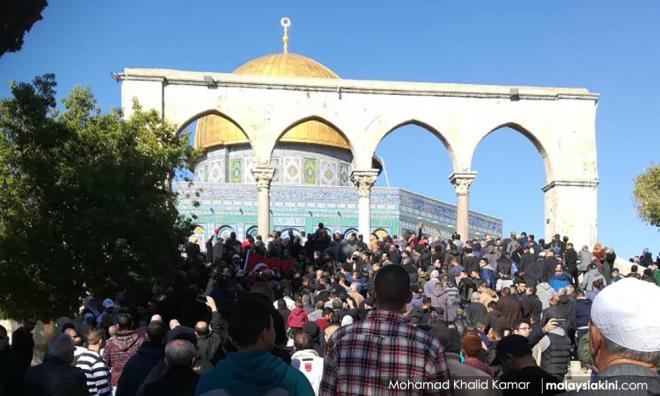 Analysts have discussed this and it looks like until the cows come home, there’ll be no consensus on this.

Some of the causes being analysed ranged from the looming eviction of the six families from the Palestinian neighbourhood of Sheikh Jarrah in East Jerusalem, the first raid on Al-Aqsa Mosque for no apparent reason on the first night of Ramadan to the march by an extreme-right Jewish group, Lehava, through central Jerusalem, chanting “Death to Arabs” and attacking Palestinian passers-by, and Hamas’ launching of rockets on Israel.

But for me, it has become increasingly clear that beneath all these causes is the overarching cause of a deadly politicking – the political survival of two Israeli politicians.

Prime Minister Benjamin Netanyahu of the Likud Party and Defence Minister Benny Gantz of the Blue and White Party have been pitting against each other in four Israeli general elections in two years since 2019, with the latest one in March that had time and again resulted in a stalemate.

While it has been proven time and again that Netanyahu has no qualms in retaining the premiership despite being charged by the Supreme Court with a first-degree corruption, and hence is the mastermind of the present conflagration to retain at all cost the premiership, the novice politician in Gantz also did not want to be outfoxed by the more experienced Netanyahu. This is especially after being played out by the latter in the only coalition government formed by both which fell apart, causing the recent March election to be held due to Netanyahu’s betrayal of refusing to have a budget that was agreed on earlier.

And since both were aware that the Israeli population was fed up and angry with having no permanent prime minister and no permanent government for two consecutive years, what better way to appease the population than by redirecting their anger and venting it on the Palestinians.

And so, the pursuit of evicting the Palestinians from Al-Jarrah before the Supreme Court was to hear the case and the march by Lehava was of Netanyahu’s doing, and the raid on Al-Aqsa Mosque by the Israel Defence Force (IDF) was Gantz’s doing as the defence minister, while the aerial bombardment of Gaza was the brainchild of both.

But, oh my, how they have miscalculated!

In an unprecedented development, more and more religious Jews and Christian evangelists in Israel, US and Europe are showing overt support for the Palestinians after years of oppression by the Zionist government of Israel.

Rabbi Elahanan Beck’s words of “we are raising the Palestinian flag and we are waiting for Palestinians to take over the land from the river to the sea; we don’t believe in the two-state solution because in our religion we are not allowed to have even one inch of the land; all the land should go back to Palestinians,” have become famous in many demonstrations the world over.

In an interview with Unews, a West Asia-based multimedia news agency that produces news videos and covers international, political and economic events, emphasising on areas of conflict in the Middle East, Rabbi Beck, who is the coordinator of the Neturei Karta movement in Britain, said: “We feel it is very important to bring the message of Orthodox Jews that Judaism and Zionism are not the same thing; Zionist people cannot speak on behalf of the Jewish people,” thus affirming that there are many Jews strongly opposed to the state of Israel.

Neturei Karta literally means “Guardians of the City”, and is a religious group of Haredi Jews who oppose Zionism and calls for a “peaceful dismantling” of the state of Israel, in the belief that Jews are forbidden to return to their homeland until the coming of the Jewish Messiah, and that the state of Israel constitutes a rebellion against God.

Rabbi Beck went on to say “since the beginning of the ideology of Zionism, most of the Jewish rabbis, 99 percent of them, strongly opposed it,” and noted that “there are many Jews that are loyal to Torah and loyal to God that totally oppose the state of Israel”.

Beck made it clear that Zionism is a rebellion against God Almighty, saying “we believe that God promised a land for the Jewish people but this goes under a certain condition, that is, to keep a high level of life, otherwise they will be exiled and this is stated in the books of prophets and this is what happened”.

He also said that the idea of a political capital of the Jewish state in Jerusalem was the concoction of Christian Zionists and is alien to Judaism which believes that Jerusalem and Israel are a place for the Jews who are the people of God to lead a life of religious piety, regardless of who owns the sovereignty of Jerusalem.

Even a US Congresswoman, Alexandria Ocasio-Cortez, while speaking on the House floor on May 13, said: “The president and many other figures this week stated that Israel has a right to defend itself, and this is a sentiment that’s echoed across this body. But do Palestinians have a right to survive? Do we believe that? And if so, we have a responsibility to that.”

Member countries that had normalised relations with Israel last year were severely rebuked because this “bromance” with Israel without achieving Palestinian statehood represents support for apartheid.

This has put Arab countries that have normalised ties with Israel – Sudan, Morocco, the United Arab Emirates and Bahrain – in a particularly embarrassing position, having premised their peace accord with Tel Aviv on the notion that normalised relations would serve the interest of the Palestinian cause.

The latest politicking of the Israeli duo is to widen the conflict by hitting at Hamas representatives worldwide in which Turkey, Iran and Malaysia were targeted.

In response, Home Minister Hamzah Zainudin said all national security agencies have stepped up various aspects of security measures to maintain public order of Malaysians, including Palestinians who are in the country.

“The Home Ministry calls on the public to remain calm as the country’s security situation is under control and at a good level,” Hamzah said in a statement.

Netanyahu is reported to have exhausted the time given to him to form a coalition government, which was last week. Since he has failed to form a government, it’s the turn of Gantz to form one beginning this week.

Let’s hope the novice Gantz will be the wiser in pursuing the formation of a government that features a lasting peace for Israel and Palestine, and the world.

Their current efforts at politicking to keep the coveted post of prime minister for themselves is a deadly one that has resulted in the deaths of hundreds of Palestinians and Jews.