Likewise, all political leaders across all aisles, must also encourage their respective followers to move forward and do not engage in actions that can fan racial and religious... Not many people are aware of one critical fact: that Malaysia is a federation of 14 states (including Federal Territories). This despite all the symbols and numbers of stripes on the Malaysian national flag that signify the collection of 14 states to form one country, it is often seen as a polity almost self-existential on its own.

To the degree anyone still questions about the structural integrity of the population, that is whether the multi-racial and multi-credal country, can last and last, with the goal to thrive, cynics often point to the unlikelihood of Malaysia to get everything all into one unifying act.

As this is written, there are 60 countries that could crack economically and politically in 2023 according to the estimate of the International Monetary Fund (IMF) and the World Bank, according to the President of Joko Widodo of Indonesia, in a Tik Tok video that has gone viral in the latter half of 2022. He reminded the audience that “Indonesia” is not one of them. Thus, regardless of the pain in the spiral in the cost of living, Indonesia can pull through in any looming recession, even if it were to last two to three years.

The time frame of 3 to 4 years is based on the view of British Prime Minister Rishi Sunak, who has prepared the British to face the austerity drive. There is a need for the United Kingdom (UK) to tighten its belt, as the government pulls back from higher public spending. The world economy has been suffering from the triple whammy of the Pan Slavic war between Russia and Ukraine and the ostensible attempt of the United States (US) to decouple themselves economically, and the effects of the Covid Zero policy that has made China’s economy moving in spurts, in turn, affecting the supply chain of the world of international commerce.

Under such adverse circumstances, the Gross Domestic Product  (GDP) of Malaysia, which has been growing from 2010 to be exposed to global trade by 110 percent, it goes without saying that Malaysia would not be spared from the triple whammy too. It does not mean the Malaysian economy would tail-spil into a recession in-eluctably but the likelihood is strong.

In complying with the royal advice of the monarch and the Conference of the Malay Rulers on November 24, a unity government was indeed formed by Prime Minister Datuk Seri Anwar Ibrahim on the afternoon of that very same day at 5 PM. Barely 3 hours later, the 10th Prime Minister of Malaysia was already working with the press. That none of the constitutional provisions that touch on the central role of Islam, the rights and customs of Malays, would ever be affected, even though the Coalition of Hope (Harapan) under Prime Minister Anwar Ibrahim has received, arguably, according to one study, 11 percent of the Malay votes, as opposed to 94 percent and 83 percent of the Chinese and Indian votes.

What is worth noting is that even given the nature of the parliament, where no side truly gained a majority of the votes to form a government, not unless as many coalition pacts work together to first cross the minimal 112 votes in a legislative chamber of 222 parliamentary seats, based on the first past the post system, Malaysians of all races and religions, did not fall into their worst temptation to bay for the blood of one another.

In fact, Prime Minister Anwar Ibrahim, had the wisdom to urge all jubilant Malaysian supporters who had been waiting for him to be elected as the Prime Minister of Malaysia, over a period of 24 years, from 1998, courteously urged all Malaysians to exercise self restraint in public celebration, in order to allow the law enforcement officers to ensure an even more peaceful transition of power; this despite the incendiary rhetoric of some Perikatan National (National Alliance) supporters who had refused to give in to the prospect of serving as the Opposition.  The supporters of Pakatan Harapan (PH) were asked to stay at home. Malaysians complied.

That message was enough to encourage the supporters of PH to stand back and exercise sheer discipline. The moral authority of Prime Minister Dato Seri Anwar Ibrahim was of course critical. But Malaysians do want to live in harmony and in peace, in turn, the rule of law.

It is therefore nothing if not strange to see the likes of Professor James Chin at University of Tasmania and the Bureau Chief of The Straits Times in Singapore, both of whom are Malaysians, to wonder if Malaysia can stay intact as a Grand Coalition of the Unity Government. The issue is of course they can. If they don’t, not only will the nation feel the full whiplash effects of the triple whammy, but the country would be trapped in the escalating cost of the food, animal feed, fuel and fertilizer, all of which can be compounded by the insidious effects of financial leakages of Malaysia’s national subsidy programs that runs of tens of billions of the Malaysian ringgit.

As this is written on November 29th, the Cabinet has not been formed. Between November 25th and November 28th, Prime Minister Datuk Seri Anwar Ibrahim has had to live up to his original pledge, to create a “Malaysia that is for all Malaysians.” In this context, instead of forming a Cabinet first, which is concurrently being discussed with other coalition partners such as Barisan National (BN), Gabungan Parti Sarawak(GPS) and Gabugan Sabah Progressive (GSP), in turn, Warisan, that was pioneered by the former Chief Minister of Sabah, namely Warisan, Prime Minister Anwar Ibrahim, has focused on instruction the civil servants to look into how to ensure that Council of Living Cost to focus on ensuring that the highly targeted subsidies program can ensure the respective deliverables to ensure the cost of living, especially on food items, moderates.

The fact that Malaysia can have an election without any fisticuffs, with 73 percent of the electoral turn out of more than 21 million voters on November 19 2022, has proven once again that Malaysians of all back-ground can exercise and choose the moderate way.

That is no matter how acute each of the electoral contests was to be, all parties who subscribe to the basic tenet of elections, must be willing concede openly and willingly, consequently, without any rancor; should the losing party loses each of these electoral contests . It is to the credit of PN that had finally conceded on November 26 2022, that it was the PH who has won the 15th general eoectiion by congratulating the new PM.

While post election rhetoric betweeen the members can continue unabated even after their election is clearly over. The key is to work together to challenge only those causes worth opposing lest they lose sight of the importance of donning the role of checks and balance.

In a functioning and working democracy, effective and strong opposition is critical towards rebuilding this nation. PN through Bersatu, PAS and lesser Gerakan, can play that part, both in and out of the Parliament. It is important to note that all must stop immediately the escalation of identity politics of race and religion, two very combustibly toxic elements in politics.

The sudden avalanche of such messaging in social media and WhatsApp groups led the IGP, Tan Sri Acryl Sani Abdullah Sani to  issue a preemptive notice that such actions will not be tolerated and actions will be taken against such perpetrators.

Likewise, all political leaders across all aisles, must also encourage their respective followers to move forward and do not engage in actions that can fan racial and religious sentiments.

Election campaigns are over, elections are over, PM has been appointed. Now all need to move forward, unifying the people, rebuild our economy for the MANY. 2023 is going to be very harsh globally, with 1/3 of the global economy going to be in deep recession, Malaysia, included. Hence, move forward and all must play a role, administration, opposition, civil servants and the people. 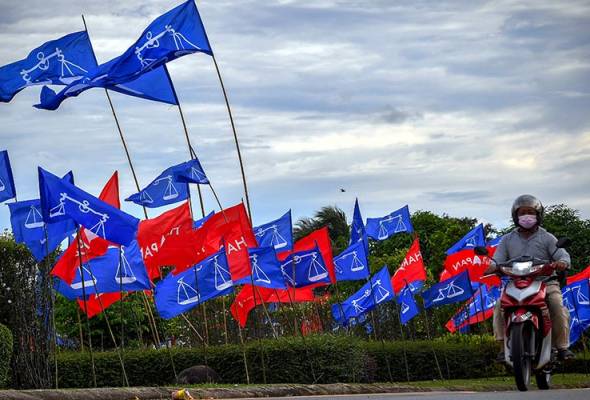 Back to the Future : The Original Perikatan BN-PH
Previous

The underprioritising of children’s mental health care
Next